The Mursiland Heritage Project combines archaeology and ethno-history to develop understanding of pastoral groups’ past and the shape and value of heritage to pastoral groups in the present along the Lower Omo Valley of southwest Ethiopia. The project is set within the territory of the Mursi ethnic group, where emphasis is firmly placed upon the character of archaeological sites as contact zones or common ground for the productive cohabitation of multiple cultures and worldviews.

The Omo River flows southwards from the Ethiopian highlands in the north, meandering along the Great Rift Valley and emptying into Lake Turkana in north Kenya. The Lower Omo Valley has for decades attracted the attention of anthropologists, geographers, palaeontologists and prehistorians. The varied geological formations and 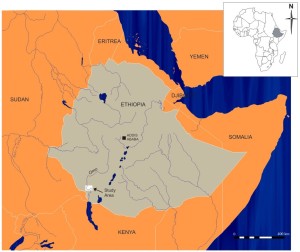 ecological life-systems found along the valley are matched by a unique cultural, ethnic and linguistic diversity expressed by nine  groups  that inhabit different areas of its landscape. The Lower Omo Valley was designated as a World Heritage Site by UNESCO in 1969, and some of the oldest and most important fossilised remains of our earliest human ancestors have been found there, providing a rich opportunity for enhancing our understanding of the biological and cultural evolution of the human species.

Whilst emphasis has traditionally been placed either upon the earliest prehistory of the region or the groups who inhabit the valley today, much of what lies in between has largely remained overlooked. The Mursiland Heritage Project works towards an understanding of this long intervening period of time between the distant past and the present. However, the project is not solely focused upon the past, but is very much directed towards the present and the future by also engaging with notions of heritage as understood and expressed by the current inhabitants of the study areas.

Since 2009 the Mursiland Heritage Project has aimed to bring these themes together through a combination of archaeology and ethno-history. Rather than simply viewing these as tools of validation for particular narratives of the past, a concerted effort is made throughout the project to recognise these practices as contact zones in which common ground may be sought for productive and collaborative engagement across the multiple worldviews of researchers, locals and officials.